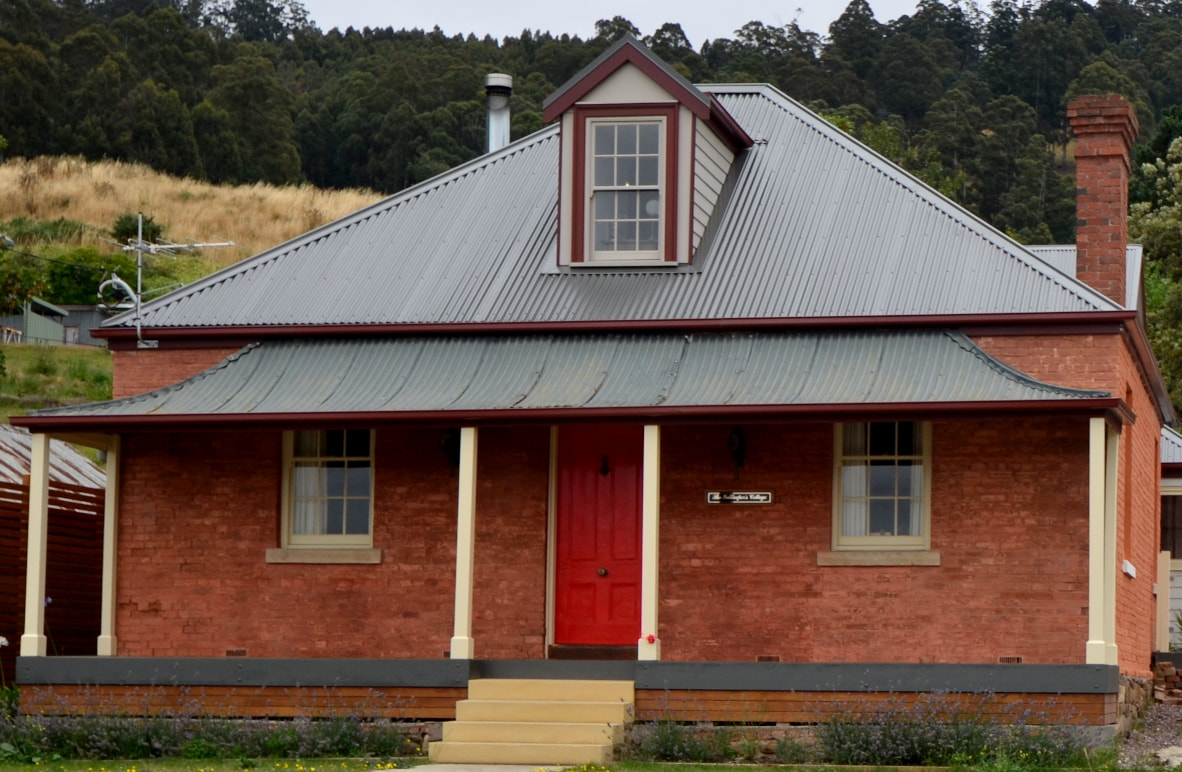 An ancient site
Beneath the floor of 3456 Huon Highway Franklin there rested a reminder of history well prior to European invasion, and discovered in restoration work in 2016. Did colonial builders recognise it or know what it was? Had they been so blinded by the doctrine of Terra Nullius, that they had no awareness of an ancient people who had lived in this place for thousands of years?
It is believed, that the Melukerdee regularly moved from the river wetlands to the surrounding hills. A token of their presence, this right handed tool was very probably used for cutting fish that had been caught in the adjacent river.
Probably the first European in the district was a convict 'bolter' named Martin who settled beside the Huon River around 1820. He built a reed and slab hut with a stone fireplace near Price's Creek and successfully cultivated potatoes. During the 1820s John Price (known as a vicious overseer at Norfolk Island and after whom Price's Creek is named) built a rough hut on Prices Creek. Price sold 640 acres of his land to Lady Jane Franklin.
In 1839 Lady Jane Franklin distributed that land to poor but honest settlers. Her commitment to the project was so great that she interviewed every applicant before handing over the 100 acre allotments. By 1842 Jane Franklin had established a social experiment for the poor, originally called the Fernlands, then The Huon Settlement and later still in 1850 Franklin (1). This was a 'different type of village' (2).
The problem of isolation was a major difficulty faced by the early settlers. In the 1840s and 1850s many settled along the river, which was their means of transport.  The Geeves family moved to Lightwood Bottom in 1850 and founded Geeveston; the Judd brothers founded Judbury and the Sherwins moved just south of Judbury to Forest Home. With its prime position on the river, Franklin was seen to be the central town with a busy port, with needs for law and order and administration.
The toll collector's cottage?
Local historians claim the 3456 building was constructed in 1846, in the first decade of acquiring land in Franklin by John Price (1836) and John Clarke (1837). While the claim that this 'roadside cottage' was used as the toll collector's house, with the Huonville bridge was not open until the 1860's, such a toll is more likely to have been collected for the river than the road. The shoreline appears closer to the house than it is in  the present day  (3).
The position of the house close to the Kennedy warehouse (presently 3450 Huon Highway with remaining stone wall) and wharf and, the fact that the road was not developed until the building of the 1860s bridge at Huonville, suggests that there may have been a toll playable for use of the wharf. Furthermore, its location opposite the first jail and police station built (1854) and courthouse (1882) in the legal precinct, made it ideal for public utility (4). At the same time, the use of the building as a police station in 1850 may well have influenced the granting of neighbouring land to the south of 3456 to the “troublesome Irish Catholics” in 1856.
The building
Just how much Jane Franklin's penchant for the Grecian / Georgian style influenced the early architecture in Franklin, especially public buildings, is open to question (5). The so called toll house has been strongly influenced by the end of 18th century classical revival which gave rise to the Georgian period with its predilection for symmetry and simple lines. Some would argue that the colonies knew nothing but the late eighteenth century tradition. Here the lingering style, simple and stately although humble in execution, was later to be called ‘old colonial’ (6). On the front north and south outside walls there are signs of early convict brick chimneys, renowned for needing to be replaced. An early photo shows simple Georgian / Neoclassical style lines with no East facing attic window, while a later photo (circa 1890) shows decorative pieces on the veranda and attic window, identical to the cottage at 3586 Huon Highway Franklin. The later Victorian era with its interest in the decorative, wooden pieces seem to be additions between 1846 and the end of the century.
Hammond and Rushton Nuss claim that a typical Franklin house was a simple four room floor-plan with a lean-to kitchen at the rear (the latter existing prior to addition and is attested to be previous owners R & L Roberts) and the veranda at the front. In contrast to many local weatherboard buildings of a similar period and design, 3456 is double-brick, most likely locally made as were the bricks for the Magistrate’s house in 1840 (7). 3456’s more substantial building materials, double brick exterior and internal walls, suggest that it was from its conception a public building.​

7. Hammond & Rushton Nuss, op cit. p. 54.
​
8. Taken from primary and secondary documents held by Peter Confeggi :
1846 :  “used as the toll collectors house” - Hammond & Rushton, op cit. p.31
1854 : John Surtees White, Deputy Clerk of Peace for the Franklin District; Owned by Thomas Stone Kellaway
1855 : Purchased by Ralph Terry, a miller of New Norfolk and Thomas Frederick Merry, Auctioneer,
from Thomas Kelloway (later spelt Kellaway) for £70
1859 : sold to Mary Ann Sampson
1897 : Mary Ann makes her will in favour of her grandson Mortimer Francis Sampson and lodges it with Perpetual Trustees. She dies on the 24th Feb 1901. Retained and rented.  Monies from rent were invested and went to him when he attained the age of 21.
MF Sampson turned 21 on 5th October 1905, Mortimer continued to live in Melbourne where he was a music teacher.
1909 : Jane Emily Kennedy, a widow of Hobart, purchased the house for  £100.
1910 : William James Griggs (will), Passed to his spinster daughter Greta Ethelwyn Griggs
1940 : Kenneth Irvine Oswald Griggs, orchardist of Franklin and Clive Herman George Griggs of Huonville, also an orchardist, the sons of William were executors.
1944 : Frederick William Kupsch, an orchardist, purchased for £200.
1947 : Majory Walker  Franklin…”a married woman”, purchased for £350.
1950 : Walter Arthur Page  RAN, of Hobart, purchased for £550.
1951 : Henry Benjamin Wooley, orchardist of Glen Huon, purchased for £500.
Between 1951 and 1977, did Henry die leaving it to his sons?
1977 : Lindsay Noel Wooley, farmer of Glen Huon sells to Ronald James Roberts, lorry driver. and Lynette Anne Roberts for $4,000.
2014 : Peter  Confeggi purchased for $230,000.