Originally published in 2018 by Jen Overton on her blog: oldroadslostpaths.blogspot.com/
Republished here with author's permission. See Jen's blog for more fascinating stories.
Before I embarked on the two UTas Convict study units, I knew I had one convict ancestor, namely Martin Cupit. My maternal grandmother was a Cupit before she married, and Martin was her grandfather, only a mere four generations back from me.
Martin arrived in Van Diemen’s Land in 1852, the tail end of criminal transportation to VDL. The abolition of slavery by the Wigg political party in England was to increasingly influence the abolition of transportation as awareness grew of a need to overhaul punishment and conditions for these convicts. Their crimes certainly didn’t begin to match their convictions. Martin and a group of his friends were caught poaching game and were all transported aboard the “Equestrian”. Martin was 5’ 11 ¾” tall, dark complexion, black hair. His height indicates he would have probably had a childhood free from malnourishment.
Martin had his right arm tattooed with a mermaid and his left with a bird and heart. He left behind a wife and daughter in Derbyshire.
Martin’s record isn’t particularly long winded. He was assigned to the Douglas River Coal Company, was fined for being drunk in Feb 1853, gained his Ticket of Leave in December 1853 and was again fined on Dec 26th, 1854 for being drunk and disturbing the peace.[i]
When he married Sarah Murphy in Franklin in 1862, his marriage certificate stated he was a laborer. How Martin ended up in Franklin, I don’t know. Franklin had plenty of convicts serving and working there, many of whom stayed on after their freedom was granted, bought or leased land and often did quite well for themselves. Martin must have made the choice to move there.
He probably labored for the many sawyers and timber workers in the Huon Valley. It was appealing work for many exconvicts, hard, physical work they were familiar with, but with freedom from chains, gangs and masters. Records exist of women working hard with their partners carrying shingles, posts and palings on their shoulders to the beach.[ii] It was probably this kind of work that the Coroner’s verdict stated that killed poor Sarah in 1876. (previous blog). The bare facts I have of Martin’s life after his marriage are that he and Sarah had two children William born in 1867, and Martina born in 1870 and they lived in a house owned by E.A. Walpole, Esq., P.M.
One snippet existing on Martin is a rather gruesome tale that was reported in Hobart’s Mercury newspaper. It involved Martin as a witness. In September 1866, a James Esson was accidentally drowned at Glaziers Bay. The body was placed in the police boat shed, and as was the norm, local doctor William Lee Dawson was summoned to examine the body as a medical witness. William Lee Dawson was a respected member of the Franklin community. He was a highly qualified Medical Practitioner who treated all the medical needs and emergencies including the dreadful injuries and deaths which ensued from the timber felling industry. He was appointed Deputy Registrar of Births, Deaths and Marriages for Franklin in 1856. He conducted inquests and his normal duties included examining victims of crime, both dead and alive. He was appointed Surgeon of the Huon Rifle Company, Southern Tas Volunteers and was nominated as a candidate to serve as a Member of the House of Assembly in 1861.[iii]

On the 15th of October 1858, Dr Dawson and E.A. Walpole signed off on the deaths of Peter McEwan age 45, James Watson age 19, Annie Montgomery age 12, John McEwan age 5 and William Willgrave age 50, all killed by a fallen tree.
Before E.A. Walpole, Esq., P.M., at the Police Office in Franklin the story was told. On the 9th of August, local farmer William Lovell and local undertaker Henry Newell both watched on in the boat shed as Dawson cut the head off the body and screwed the lid of the coffin down. The head was then taken away by a man known as “One-eye’d Jack”. As the plot thickens in what’s sounding quite like a Dickensian tale, John Whitemore was then employed to carry the man’s head (then in a bag) to Langford’s public house and show it to “Ratty” meaning Martin Cupit and also to Mr. Langford. John did as instructed and held the head up for the men to see. Two other witnesses were at the pub when Dawson came in, took the head and placed it in a waterhole near his home, then subsequently buried it. Martin and Mr. Langford collaborated the testimony adding that the head was decomposed and very offensive. The matter was then reported to the chief district constable
The next day Dr Dawson’s servant Henry Douglas, testified that Dawson opened the coffin and replaced the head back with the headless corpse. Dawson was fully committed for trial on this evidence. [iv]
I don’t quite know what to make of this story. I’d love to know why this occurred and the backstory. How much of an insight does it give into Martin, or Ratty as he was known?
Was it a dare, a drunken promise or a threat? And if so, who was threatening or daring who? Why would Dawson risk his career and social standing? I reckon I’d be pretty safe in surmising that a fair bit of alcohol consumption could have been involved throughout the unfolding of the whole ordeal though. Without delving deeper into criminal records, I can’t say what happened to Dawson, except he does not appear in local newspapers again until five years later on the 28th June 1871 in the death notices at age 53. He died and was buried in Franklin.[v]
His obituary in The Mercury on 30th June 1871 says of him that he was a benevolent, but rather eccentric practitioner (who) had been the favourite medical advisor to all persons in the Franklin district....His nature was of the true character of charity - universal, and consequently embracing all objects and persons, poor as well as rich. His skill as a surgeon and operator was not surpassed in this colony. He had his failings like other men, but they were unlike those of most colonists "written upon his sleeve" and exposed to public criticism. His virtues preponderated over what are called failings, and the attentions paid to his wearying sick bed show that he was beloved by those who laughed at his eccentricities, while they believed in his inestimable value as a citizen. 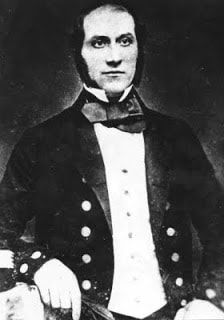 google search William Lee Dawson: Sharon: Tree of Me genealogy blog
His Obituary doesn’t gloss over the fact that William Lee Dawson had very public eccentricities and failings, with this event probably being one of them. He sounds like a fascinating man and one that when I get a Time Machine, I’d love to pop back and have dinner with in his Franklin house. Maybe he was an 'on the spectrum' intelligent eccentric who din't quite know social boundaries, Franklin's Doc Martin? Researching Dawson and these colourful Franklin characters just makes me wish I could have been a fly on the wall. Martin’s life ends sadly and prematurely too. After losing Sarah on the 24th December 1876, I would hazard a guess that Martin’s probable alcohol dependence saw him through the next two years of his life until he died of dropsy and liver disease the day before Martina’s 8th birthday in November 1878, leaving the two children orphaned. What became of William and Martina requires further research and a future blog post.
© Old Roads, lost paths (oldroadslostpaths.blogspot.com), September 2018
© Jen Overton, 2018
​[i] Librariestas name Search convict record
[ii]North of Dover & Point Esperance : Police Point to Cairns Bay : how earliest settlers changed their lives /
by Dorothy Baker. Page 4
[iii] http://nla.gov.au/nla.news-article8797120; http://nla.gov.au/nla.news-article8798879; ttp://nla.gov.au/nla.newsarticle202389235
[iv] http://nla.gov.au/nla.news-article8841810
[v] http://nla.gov.au/nla.news-article8866482