Newsletter: August 2021
The group has been having irregular meetings in the Noni Carr Room at the Palais [Palais Theatre, Franklin] but has not been idle, so, enclosed in this newsletter you will find some information about our activities. The ‘library’ is currently in storage at the store room at the rear of the Palais and the dehumidifier, used as required to keep the contents in good repair. Sincere thanks to our librarian Voytek. The catalogue of contents is a valuable resource. Requests for information about former residents’ ‘history’ can be emailed. Preparation for 2 new publications is well under way; research is very time-consuming, yet rewarding.
The Franklin Hydro Electric Power Station
The old franklin hydro station building has been the focus of attention since 2019 and the Mitre 10 management were very supportive of our hope to relocate the building back to Franklin. Without a suitable, uncontested site being available in the township as well as the costs and logistics  ​associated with removal it was recommended by Huon Valley Council that the best option would be to save the windows and then build a replica. The assistance of council staff in taking measurements and the window removal and storage is greatly appreciated. Also grateful thanks to Mitre 10 for their support and assistance. The search for a ‘home’ is ongoing and will be the focus of our attention in the forthcoming year. The following article was published in the Huon News on August 25th as part of this year’s History Week feature. 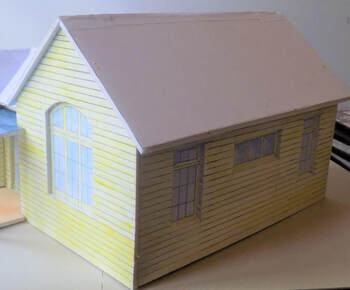 “Did you know that Franklin had its own hydro-electric station?”
The idea of lighting of the streets of the township was revived after the winter of 1913. The Town Hall, Howards Emporium, Mathers Store and the Catholic Presbytery had private systems. The Huon Council engaged Mr. Lofts from Devonport as consultant. Walter Burns was appointed superintendent in November 1915 and in early 1916, the people who had signed up received their first ‘light’. There were many problems with the supply, not least the continual leaking of the pipe joints; inexperienced day labour was used during construction.
After the state scheme reached the Huon c1926, the machinery in the station adjacent to Price’s Creek was sold and subsequently the building was moved to Huonville and used as the workshop by the Hydro Electric Department on what is now the Mitre 10 property. Huon Valley Council personnel have met with the Franklin History Group committee in the hope that the building could be returned to Franklin. After inspection they recommended that the windows be removed and a replica be constructed. HVC have the windows in storage. The Franklin History Group is currently hoping to find a site in the township to fulfil this plan thus providing a base for the group and some exhibition space. 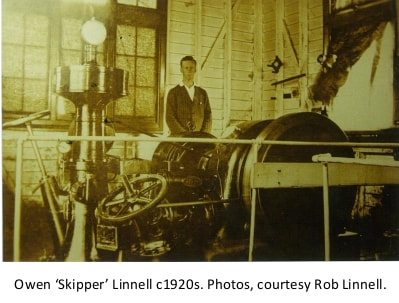 The following article about the Franklin War Memorial was prepared for the Huon News in April 2021.
​The Franklin Soldiers Memorial 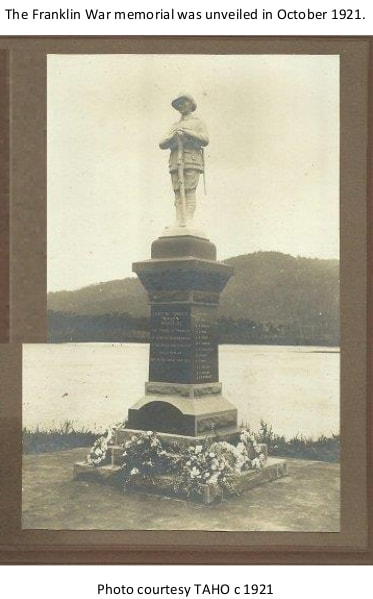 Years of planning, committee meetings and public discussion, sometimes excitable, as well as fundraising events and public subscriptions preceded the final decision on a suitable memorial for the men from the Franklin and wider community, who gallantly gave their lives for King and country. In late 1919 ideas were sought from other states re suitable designs, consensus to be sought on the final design. The tender from Mr Morgan of Launceston for £360 was accepted in late January with the unveiling expected in 3 months. The memorial would be of white Italian marble on a green base. As in the previous year, the 1921 ANZAC service was held on the Franklin Sands, (Sunday 24th April). The stone did not arrive till late September and the Franklin Soldiers Memorial was unveiled on Monday 17th before a large gathering by Lieut. Col. Lord, 40th Battalion. The statue is mounted on a block of marble on which are carved in letters of gold the names of the soldiers whose memory the memorial perpetuates. This in turn is mounted on a granite base. Almost 100 years later it stands in a prominent position in the township opposite the Palais. (C.C.,FHG)
Traces   by  Rob Linnell
Everywhere we have been through our lives we leave ‘Traces’. Little parts of ourselves and our lives. At a forensic level these could be hair, exfoliated skin, finger prints, hand prints, foot prints, our scent, our DNA and even blood droplets. These, however are fleeting and are easily swept away in a short space of time. There are other Traces that linger and should be the target of every family historian. You may notice I didn’t use the term Genealogist. I believe the two are markedly different. Genealogy, to me, is the study of the nuts and bolts; the dates, the BDM’s, the places, the connections, where were your ancestors born, lived, married, divorced, died and were buried. These are also important ‘Traces’ but not the only ones. Family history is not so easily defined. It involves all the genealogy as above but its scope is so much broader. It is ALL of the ‘Traces’ a person has left behind in their lifetime. For some this includes a lot, for some not so much. For me Family History is a collection of these ‘Traces’, but more importantly an understanding of how your ancestors lived, what were the hardships and privations in their daily lives? How were they affected by local catastrophes? What lead them to make those major decisions in life that lead to either change or disaster? Why did they move from place to place? Apart from the dull routine of life what were their interests, entertainment, community involvement and what changes or disappointments made up their lives? Genealogy is like a view of the family Traces from 10,000 feet. Family history is more a view of the ‘Traces’ from 100 feet. There are many examples here of what I mean, but I could not list them all. It would be as varied as your family
Family knowledge / stories by Ron Linnell
If you have parents or grandparents still alive (or anyone from those generations) sit them down with lots of cups of tea and a loaded tape recorder (with spare tapes) and ask them about all that you can. Don’t worry about dates, you can get those from civil or church records. Look for family stories, relationships, friends. Stories of sporting activities, work stories, memberships, school memories, growing up memories, funny tales, different places they lived, reasons for moving, churches they went to, clubs they belonged to, how they first met their partners. What was it like going through the numerous Depressions, catastrophes, wars, etc? Not just them personally, but how did the family cope? Without these I wouldn’t have known of their work in the orchards, the local Ship’s Carpenter turned builder and Merchant, or about the extent of River Traffic, the hydro plant, the Huon regattas, the river steamers, or the local salmon poacher. All the things that you can think of that may give you clues to research. All this important information is stored in their heads, from experience or from stories passed on by their parents. None of us will be here forever, many of us will suffer from Dementia. Those in early stages of dementia often find their long-term memory returning. I did this with my parents, and the results were outstanding. Now my parents have passed I’m so glad I took that time early enough. All those stories (about 120) I’ve now transcribed and preserved them for generations to come.
Ex​cerpts from Traces will be included in future newsletters