The 'Oberhausen'   by Rob Linnell

This story is about the involvement of the Franklin Auxiliary Cadet Militia in the seizing of the freighter ‘Oberhausen’ in the opening hours of The Great War.
The ‘Oberhausen’ a freighter of the German-Australian Line, was berthed at the wharf at Port Huon, Tasmania, and was involved in loading timber. 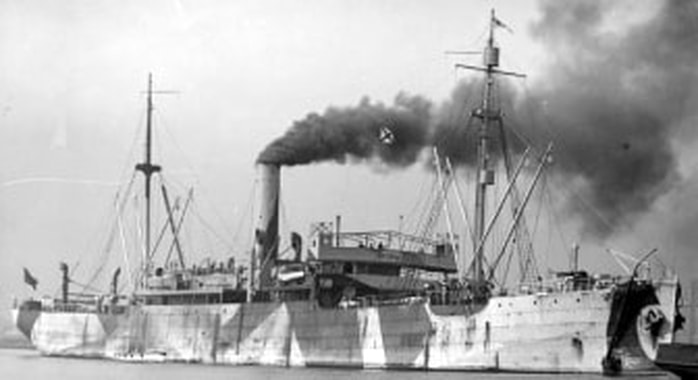 Very shortly after War was declared [April 1917], The Australian Navy despatched five sailors down from Hobart by car in order to impound the ship.  At the same time they sent a telegraph to Captain Edward Isaac Linnell who was the commanding officer of both the Franklin and Geeveston Auxiliary Cadet Militias. The nearest military forces in that part of the Huon. 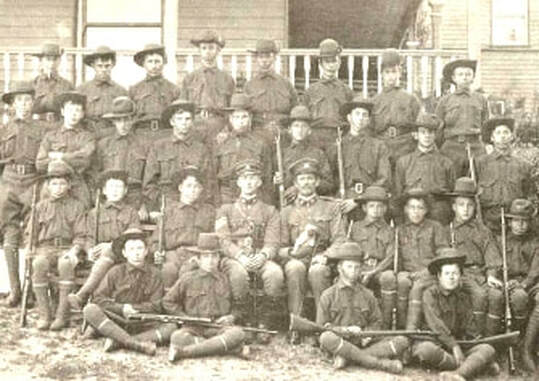 Edward was in Franklin, so the Franklin Cadet Militia was the nearest military group. The Geeveston Cadets being on the other side of Hospital Bay. Messages were sent out to the Franklin cadets who then found their way to the Area office in Franklin. Grandfather ran around his house putting on his uniform, ready to take the M.L.‘Lucy’ and the cadets down-river to Port Huon. It was quicker to take the motor launch rather than rustle up enough vehicles to get sufficient cadets down to Hospital Bay. It took a little time because Edward couldn’t find his sword and hat, his young children had been playing with them and had left them in different rooms around the house. When they all came together they boarded the ‘Lucy’ at the Franklin jetty and motored down-river to Port Huon.

​​M. L. Lucy
In the meantime, the sailors who were in a car coming down from Hobart were held up by a large tree that had fallen across the road.
They were unable to go around it and not having any saws or axes to clear the tree off the road, they had to wait some time for a vehicle to come the other way. After a while a bus came along, so they commandeered it, turned it around, and continued on their way, towards Port Huon. The Franklin Auxilliary Cadet Militia were the first to arrive. I have a funny mental picture of the Lucy coming around Shipwright’s Point full of Army Cadets with their rifle barrels poking out of the windows. They must have looked like pirates.
The ship surrendered easily because they were too far from any friendly port, so would not have been able to refuel. The cadets, and Grandfather took control of the ship and held it until the sailors arrived. The sailors then boarded and took the ship back to Hobart. The ship was later renamed the ‘Booral’.
​The involvement of the Cadets was not recorded in the contemporary newspaper accounts.
By the time the press got there the militia had probably already been relieved and dispersed.  he Navy must have been embarrassed by being upstaged by the local Militia cadets!
This story came from my Grandfather, John Edward Isaac Linnell, who was there, and his father, Captain Edward Isaac Linnell.
It was told to me by my father, Douglas John Linnell, who had heard it from his father.
Rob Linnell
​
['Oberhausen' related articles:
see 'Diary of WWI German internee who spent time on Bruny Island provides rare insights' - abc.net.au
see 'Dear Mama, the diary of German POW, 1914 - 1915, book launch - abc.net.au]